Evolve Skateboards
SKU:
Availability:
Due to Covid-19 limitations some products might not be in stock. Please call or email to confirm availability.
$1,899.00
(You save )
(No reviews yet)

The benchmark of quality for all electric skateboards, the Carbon GTR is in a class of its own. It boasts unrivalled build quality, beautiful aesthetics, and exhilarating performance. At Evolve Skateboards we design and manufacture top-shelf premium electric skateboards. We are passionate about creating the best performing carving machines that embody both the future of personal transport and the endless wave lifestyle.

2 BOARDS FOR THE PRICE OF 1

The 2 in 1 option has everything you need to covert your GTR to both Street and All-Terrain versions, giving you ultimate versatility so you can ride where and how you want to. 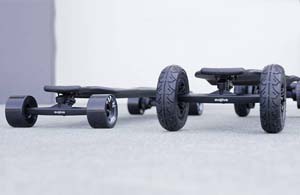 Handmade from 100% Carbon fiber, the Evolve Carbon GTR Street's deck beautifully conceals the electric system which is powered by our new patent-pending Power Flex battery technology and the best 18650 lithium-ion battery cells available. Providing you with a real-world range of up to 50km per charge, this board will turn any road or path into the endless wave of your dreams. This coupled with Bluetooth communication is a game-changer for Evolve skateboards as it provides instant power and ultra-smooth acceleration and braking performance, placing the ultimate in intuitive riding control in your hands. With 3000 watts of twin brushless sensored motor power driving our new made in USA Evolve GT 97mm inline race formula Wheels, this triple matte black beast is like a panther unleashed.

With an undeniably sexy low profile and a concave deck built for those who like to be in control, corners will turn into apexes, open stretches into runways, and wide open paths will make your list of favorite powder runs. A badass weapon with a high-tech vibe, the Evolve Carbon GTR Street is a stealth predator that likes to eat hills for breakfast. With a grippy super smooth ride, you'll have the ultimate control and stability.

The Evolve Carbon GTR Street offers even more flexibility for the riding enthusiast than ever before with a new airline friendly swappable battery option for those who want to take their Evolve boards with them when traveling. Now you can also track and share your rides and compete against the worldwide community on the new Explore by Evolveapp, along with over the air updates for IOS and Android phones. Unlike other boards on the market, the Carbon GTR Street is compatible with our All Terrain Kit which completely changes the feeling by opening up a world of new paths for you to explore.

The Remote and App

The Evolve Carbon GTR Street offers more riding modes than ever before allowing riders of any level to safely enjoy the product and have the ability to adjust your riding mode while riding to suit conditions and maximize efficiency. Use 'ECO' mode for easy control and a safe top speed, perfect for beginners and those riders wanting a relaxed ride with longest ride times. Use 'PRO' mode to whizz past traffic and turn your commute into your daily adrenaline rush hour, and if you dare, switch to GTR mode to unleash insane power and acceleration with the ability to climb hills of up to 25% gradient. For those that want a power curve that is different from ECO/PRO/GTR modes, select CUST (custom) mode on the remote, then open up the Explore by Evolveapp and dial in the power curve to suit your riding style. In this mode, you can adjust the power to be weaker or even stronger than the stock speed mode settings that come with the R2 remote.

What's in the box?